THE ASYLUM PLAYERS AT THE BLUE ROOM

The Asylum Players are a brand new “in-house,” semi-professional theatre company. Working exclusively with The Blue Room in Lincoln, the company is formed of local actors of all ages and backgrounds, who share a love of theatre and performance.

What do we do?

We tell stories. Each year The Asylum Players will put on a season of three shows, drawing from the best theatrical talent Lincoln and Nottingham has to offer. Our shows will be challenging, ambitious and accessible.

To entertain you and to enjoy ourselves. Theatre should never bore, it should simply entertain. If you enjoy the shows, then we know we’ve done a good job. If everyone involved with the production enjoys themselves then we give you a better show. It ain’t rocket science.

Can I get involved?

Absolutely. The Asylum Players are a family. We don’t do egos and we don’t do politics. Everyone who joins our “production family;” actors, directors, musicians, stage-hands, front-of-house, does so to work hard and enjoy their time with us. If you think you’d like to get involved give us a shout on enquiries@asylumplayers.co.uk or keep an eye out for the latest audition news.

The Asylum Players presents: The Crucible by Arthur Miller.

Witch Hunts and Fake News, ring any bells? Arthur Miller’s classic story of the power of mob rule and false belief. Set in Salem 1692, we watch the tragedy of the Witch Hunts that devastated the community and took the lives of many innocent people. Written by Miller, in response to the insanity of 1950s McCarthyism, this is a story that becomes alarmingly more relevant with every passing day and every badly spelt Tweet. 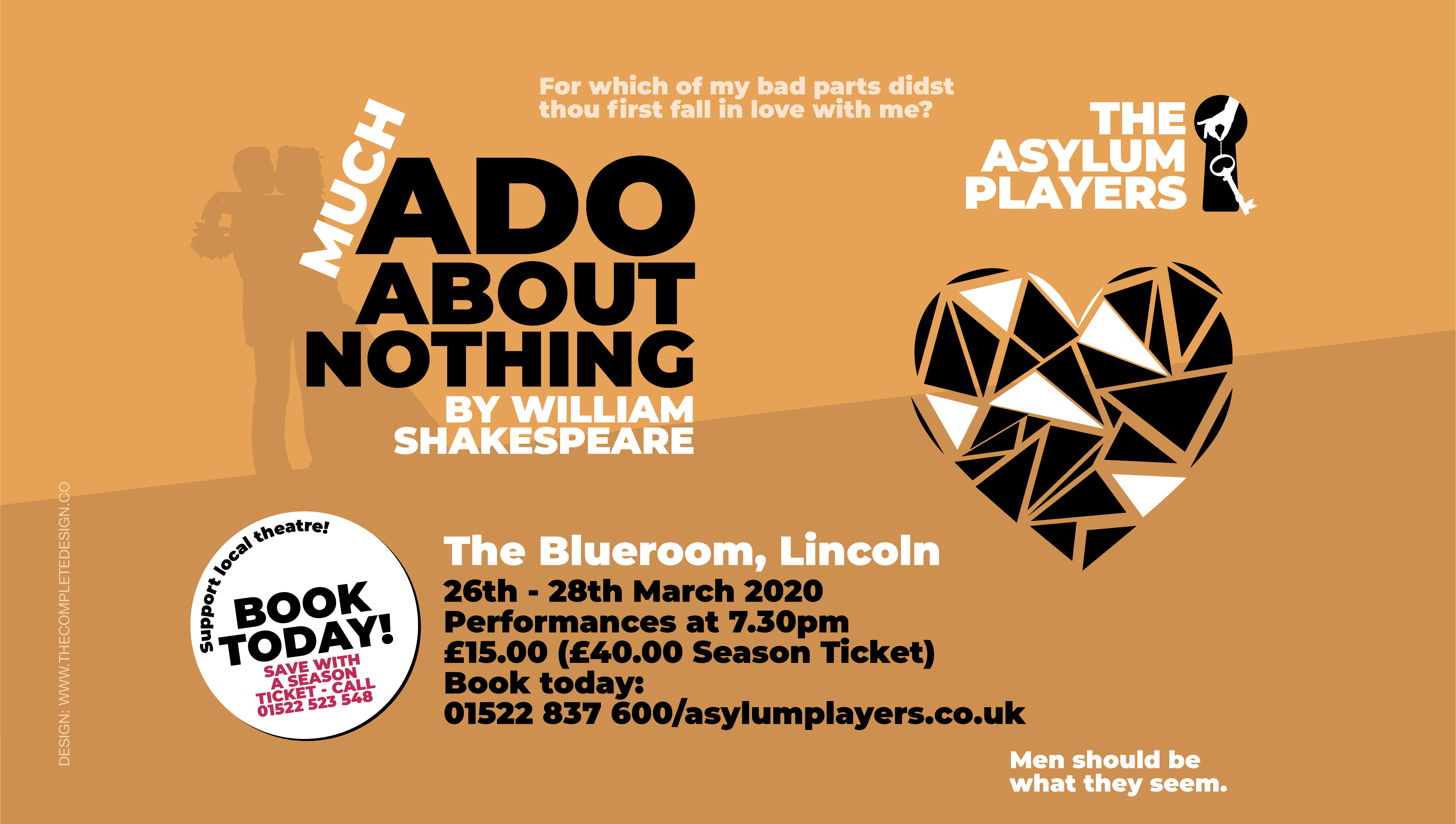 Much Ado About Nothing.

The Asylum Players present: Much Ado About Nothing by William Shakespeare.

“For Which of my bad parts didst thou first fall in love with me?”

The Asylum Players present: Benedick loves Beatrice. Beatrice loves Benedick. The only problem is that neither of them know it yet. Join Shakespeare’s rich cast of heroes, villains, inept police officers and a wandering Babershop Choir (possibly not in the first Folio) to witness the ‘Merry War,’ that is Much Ado About Nothing.

Some couples may bicker. Some couples might argue. Some couples even fight. Elyot and Amanda can show them all how it’s done. Private Lives, Noel Coward’s famous comedy of manners, set in the 1930s, follows two couples on, what can only be described as, the honeymoon from hell. Ex-husbands, ex-wives and assault with a vinyl record, turn what should be the happiest night of both couples lives, into a night of absolute…well…Sollocks. 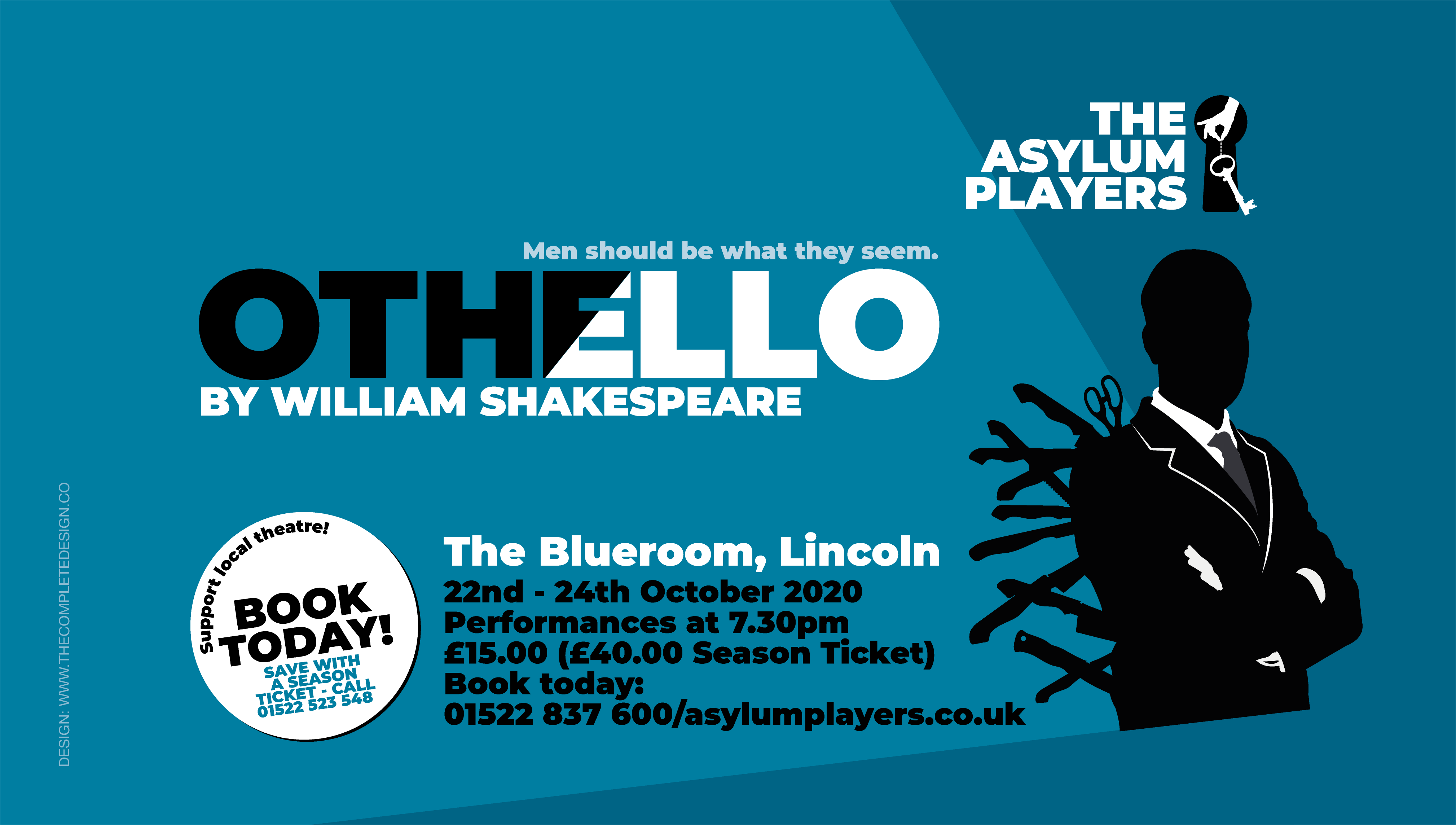 “Men should be what they seem.”

Shakespeare’s enduring tale of love, betrayal and tragedy comes to The Blue Room. Given a contemporary setting but using Shakespeare’s original text, this production is the story of a great man deceived and betrayed by the people closest to him.

Othello has fought for his country, for his friends and the woman he loves. He has bested impossible odds and risen in a society that deems him less that those around him by dint of the colour of his skin. Iago, seemingly his closest friend, will bring his accomplishments crashing down for jealousy’s sake.

HOW TO FIND US